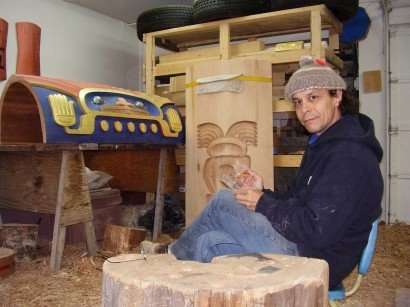 Ya’Ya is Charles Peter Heit. And Charles Peter Heit is YA’YA. Ya’Ya wuz born into the FireWeed clan of the Gitxsan tribe of northern BC, Kispiox village. Ya’Ya’s maternal ancestors have been living there and along the Skeena River for thousands and thousands and thousands of years. A very very long time for sure. Ya’Ya is born into the royal family of the House of Geel. He is a hereditary chief holding the ancient name Xyadiit. From his fatherside, Ya’Ya gets his German blood. Peter Heit Sr. wuz born in Saskatchewan, he came west looking for mountains and found love. The first time he ever saw Margaret Harris he fell in love and they stayed happily married for 67 years. Peter and Margaret have 5 children.

Ya’Ya says he is a part time artist because he likes to live a traditional Gitxsan lifestyle. So Ya’Ya hunts and fishes a lot, all year . He is happy and proud to help feed his people, especially the elders. Ya’Ya routinely takes people out and onto the land to help them learn the best lifestyle, the life of a good healthy Gitxsan person. And Ya’Ya has been using his artistic talents to help anyone who is interested in learning all about art.

Ya’Ya began drawing west coast art on his own in grade 5. After he learned that his uncle wuz an artist, Ya’Ya moved in with his mother’s parents in Kispiox and started carving lessons at a place called K’san in nearby Hazelton. At that time a lot of really good and famous artists  worked together there. Ya’Ya learned a lot from all of them. At the same time Ya’Ya started an apprenticeship with his famous artist/uncle Walter Harris, that lasted 4 years. Ya’Ya wuz carving and drawing and painting and hunting and fishing about 8 dayz a week back then. When he  wuz old enough, Ya’Ya wuz put into the Gitxsan tribe’s own ‘Kitanmax School of Northwest Coast Indian Art’. As soon as he graduated from the art school, they hired Ya’Ya as an instructor!!. He wuz 18 years old.

Ya’Ya has traveled to many places promoting his art works and himself and his proud people of the Gitxsan tribe. Wherever he travels, he likes to learn something of the people and the places that he visits. Ya’Ya has also been lucky to receive large art commissions once in a while. Monumental art is his favorite size to create. But Ya’Ya can make anything; any size, and from any kind of material. Ya’Ya works mostly with locally grown red ceder, but he has tried many different woods from all over the world. Ya’Ya can carve the hardest stones and tiniest soft stones too. He also works with precious metals, hammering the flat metal into 3 dimensional wearable art.  Every ten years or so, Ya’Ya makes a limited edition print or two. Opals, sea shells, buttons, copper and gold can all be seen inlaid into Ya’Ya art. Perhaps his proudest works of art come from button blankets that Ya’Ya makes with his Mother and his children, a really proud family effort, 3 generations of proud people working together.

When Ya’Ya got involved with his tribe’s land claims court case, Delgam Uukw & Gisday Wa vs the Queen, he became a computer expert working with GIS mapping equipment (geographic information systems). He wuz also teaching others to make computer powered maps too, and how to trap furry critterz. The Gitxsan were allied with their ancient neighbors the Wet’suwet’en tribe. Together they won many small important legal and humanitarian victories, but at the end of the court case, the judge ordered a retrial. Since then the two tribes have been trying to negotiate separate treaties with Canada and B.C. 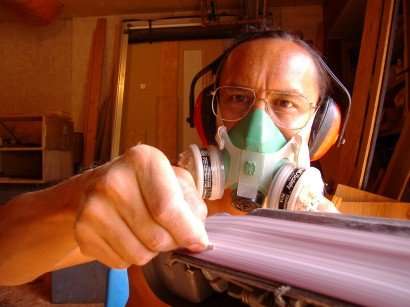 Ya’Ya first went out into the public in 1977 as a participant and exhibitor at the ‘World Artist Symposium 1977’, held in Toronto Canada. In 1986 Ya’Ya and his mother Margaret were invited to make a button blanket for the international traveling show, “Robes of Power’. Ya’Ya’s auntie Doreen Jensen wuz a curator and traveled with her big sister Margaret as they accompanied the show from the ‘Vancouver Expo 86’ to Scotland, and on to Australia. In 1994 Ya’Ya wuz invited to participate in an art show at the prestigious Vancouver Art Gallery. The show was called ‘Topographies’ and Ya’Ya’s contribution wuz a large solid mahogany wood Chief’s Chair. Ya’Ya has been in many group art shows since he started producing works of art, and even made it onto the covers of a few of the catalogs. One summer he worked with his other famous artist uncle Earl Muldon. They were makin full size duplicates of some of the very best old totem poles in the world, in the Gitxsan village called Gitanyow. Real totems for real people. In 1998 Ya’Ya finally got to do a big carving that would stay in his own Kispiox village, the center of the world. That wuz a large carved and painted wall panel for their brand new school that all 3 of his children attended. Ya’Ya is very proud to have been included in a 2010 Olympic art show that traveled thru North America and Europe for 2 years.

Ya’Ya is currently working on 2 large wall panels for York University’s Osgoode Law School in Toronto Canada. For the last 10 years Ya’Ya has been saving some of his best art works. He is planning for a one man art show to be held in 2014. Recently Ya’Ya started writing short stories and articles about his Gitxsan people and culture. These he hopes to publish himself and introduce at his show too.