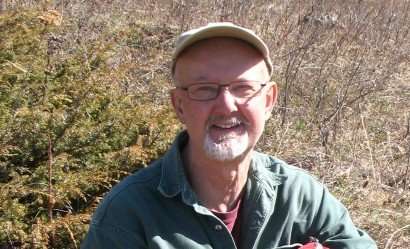 In between, he was staff writer for the Banff School of Fine Arts, legislative reporter for the Regina Leader-Post, a bartender at the Oak Bay Beach Hotel in Victoria, and a bookseller at Interior Stationery & Books in Smithers, BC. He wrote a book on the history of that community and, along with his wife, writer Sheila Peters, established Creekstone Press, a local publishing company specializing in books from and about northern BC.

In 1989 he received an RN diploma from the College of New Caledonia in Prince George and spent the next 10 years working in the ICU and ER at the Bulkley Valley District Hospital (BVDH) in Smithers. When the hospital opened its Community Cancer Service in 2001 Lynn was its first chemotherapy-certified nurse and coordinated the service as it grew to a department with three oncology-trained family doctors and three chemo-certified nurses.

In 2008 he joined the NH hospice palliative care consultation team, introducing the program to the Northwest and serving as nurse consultant for an area from Houston to Haida Gwaii. Prior to retiring in 2010 Lynn co-authored (with Mitch Verde and Janet Foreman) a research paper examining barriers to palliative care delivery in northwest First Nations communities. He has written articles for the NH palliative care newsletter on grief support and cultural competence and, just before his retirement, was the recipient of a British Columbia Community Achievement Award.

Since retiring Lynn volunteers with the Health Information Hub in Smithers, the Community Cancer Care Team, which raises funds to assist local cancer patients who must travel out of town for diagnostics or treatment, and the Bulkley Valley Hospice Society. He also serves as in-house editor for the annual Rural-Writers-in-Residence retreat in Smithers where he talks a lot about Ars Medica: A Journal of Medicine, The Arts and Humanities.