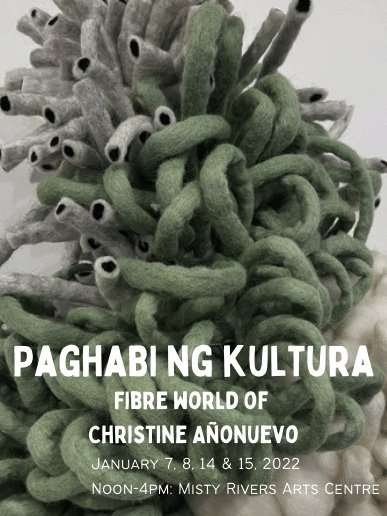 In this solo exhibit, Christine connects sensorial memories of being a child to her parent’s homeland of the Philippines. Her mother was one of the first diasporic Filipina women to settle in Penticton in the late 1960s. Growing up in the Okanagan Valley Christine was surrounded by baníg (woven mats) and various baskets made from natural materials from her mother’s home province of Pangasinan. Her father fled martial law in the Philippines in the 1970s, leaving behind a thriving homestead and garden, landing first in Vancouver and then in Penticton.

Christine uses wool and colour as playful mediums to unravel memories and create cultural belonging, even though she is far from her ancestral islands. Natural wool, spinning and weaving are healing modalities to counter acculturated stress and trauma that results from separation from family, food, culture, language, and land. 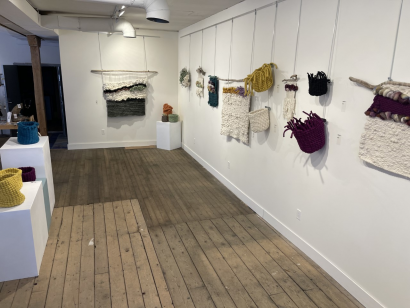 Christine Añonuevo spent her childhood immersed in interdisciplinary arts. She learned Filipino dancing from her parents and relatives & went on to formally study ballet and contemporary dance- competing at the provincial level. She performed in the Youth Symphony of the Okanagan, playing flute and timpani. She received an associate diploma in piano performance from the Royal Conservatory of Music at the age of 17. Christine holds a Bachelor of Arts from McGill University and a Master of Adult Education from St. Francis Xavier University. She spent many years working in anti-oppression education with LGBTQIA2S+, racialized, Black, Indigenous and youth of varying diverse abilities across rural BC, Japan, the United States, Ukraine and South Africa. Her creative writing has been supported by the Canada Council for the Arts, the Banff Centre for Arts and Creativity, and through a BIPOC Writers Connect mentorship with the Writers’ Union of Canada. Christine is an emerging poet and her poetry has been shortlisted for the Malahat Review’s Open Season Awards, the Malahat Review’s Long Poem Prize and Prism International’s Pacific Poetry Prize.

She has lived on Haida Gwaii, Tsimshian, Wet’suwet’en & Gitxsan territories for the past fifteen years.