Prince George PRIDE event supported by HARC was a Success

The Health Arts Research Centre was honoured to support an amazing, giant mural project which took place on Our Savior’s Lutheran Church in Prince George in celebration of the LGBTQIA2S+ community. While churches have been dangerous and fearful places for those who identify as LGBTQIA2S+, this mural is a means of re-claiming this space as one which can promote healing and healthy relationships. As part of the Pride Car Rally celebrations, there was an opportunity for folx to put their hand prints on tiles in July.

The mural project was met with overwhelmingly positive feedback and the project prompted the formation of a support group called ‘Fruit Combo’ for those aged 14-20 identifying as LGBTQ2SIA+. A photo of the mural titled ‘Our Rainbow Heart Pride Mural’ is shown below. 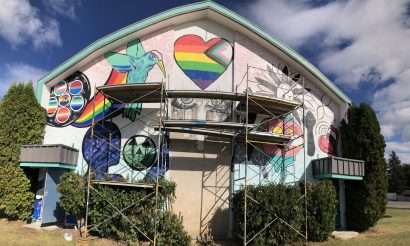