The FIRST Science and Health Summer Camp for Northern BC Indigenous Youth was a HUGE Success!

From July 15th through the 19th, Indigenous youth from northern BC attended a Science and Health Summer Camp at the University of Northern British Columbia (UNBC). The purpose of the camp was to introduce Indigenous youth to a post-secondary environment and inspire them to learn more about and potentially pursue health and science-related careers.

Campers stayed overnight in the Keyoh student residence building on the UNBC campus and ate meals at the Agora Dining Hall. Throughout the week, campers were busy participating in science and health-related activities, games, and arts and crafts, both at the university and at various locations around Prince George. Campers were lended digital cameras to take pictures throughout the week. Many of the following photos are taken by campers themselves!

Come along as we travel through the week’s events!

Campers began the week by attending an opening ceremony with a traditional welcome to the territory by Lheidli T’enneh Elder Darlene McIntosh and drumming by Kyle Sam. Following the welcoming, campers toured the university campus with their camp leaders and competed in a “UNBC Amazing Race”, which had campers discovering and solving riddles and puzzles while traveling to different university buildings.

After lunch, Charmaine Lace, Wanda Nikal and Helen Nikal shared about harvesting and using medicinal plants as the campers prepared for an afternoon hike where they could try to identify and photograph some of these plants. Campers then set off on an outdoor guided walk to Shane Lake through Forests for the World with Environmental Health Officers from the First Nations Health Authority and staff from the ECHO Network.

Campers enjoyed taking photos along the way and exploring the lake once the group arrived. Educational discussions were held around water and watershed health, as well as connecting environmental health to community health. Campers chose their own sites to collect water samples, which they later tested for bacteria with the help of the FNHA Environmental Health Officers. That evening, campers were guided through activities with Warren Hooley that centred around getting to know each other and the importance of respect and acceptance of self and others.

On the second exciting day of camp, campers had the opportunity to tour the Northern Analytical Lab Services (NALS) Laboratory on the UNBC campus, hosted by Dr. Hossein Kazemian as well as UNBC undergraduate and graduate students!

In the afternoon, campers went to the atrium of the Dr. Donald Rix Northern Health Sciences Centre to analyze the results of their water samples collected the day before and learn about the importance of proper hand washing and food safety with leaders from the First Nations Health Authority. They appeared to really enjoy looking for bacteria in their water and talking about germs!

Marion Erickson then guided youth through traditional meal preparation of char, followed by a fun-filled competition where campers raced to make the fastest and highest ranked soap berry ice cream! That evening, Tamera Ketlo, Organic Health and Wellness Specialist (Natural Obsessions), guided youth through an interactive workshop where they had the opportunity to make their own natural ingredient salve and candles. The salve was put to use right away on campers’ and leaders’ bug bites!

On the third day of camp, campers embarked on Prince George Transit buses to travel to the Exploration Place Museum and Science Centre. There, campers learned from Rachel about the vacuum that exists in space, worked in teams to build their own rocket models, and enjoyed themselves exploring the rest of this wonderful museum. Once back on campus in the afternoon, campers watched a film about space at the Canfor Theatre, a large lecture hall for UNBC students.

In the evening, campers learned about mental health and mindfulness with Stephanie Erickson, a Master’s student studying psychology at UNBC who is Dakelh from the community of Tl’az’ten. and created their own personalized mindfulness jars. To complete the day, campers listened to traditional stories from Marion Erickson about space and creation. 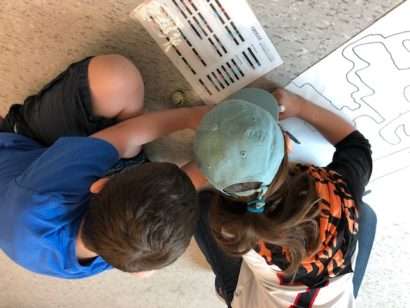 Day four began with campers going to the UNBC Computer Lab to learn about computer science and coding with Jaclyn from the Exploration Place. Campers impressed us with what they already knew about coding, controlling their small robots, and computer science! Campers then took Prince George Transit once more to travel to Two Rivers Gallery in downtown Prince George for an exciting Stop-Motion Animation Workshop. You can watch their amazing videos here!

After the Stop-Motion Animation Workshop, campers walked to University Hospital of Northern BC (UHNBC) and visited the Simulation Lab. There were three stations for campers to rotate through- one station involved learning about CPR through practicing it on a VERY lifelike simulation robotic patient, another was on learning about different health career options, and the third involved engaging learning activities from two speech and language pathologists.

After dinner, campers walked through Forests for the World to visit the traditional pithouse. The group spent the evening singing songs led by Vince Prince, playing drums, listening to stories, and making bannock over the fire.

On the morning of the final day of camp, Lorishad Desjarlais led campers through a reflective art activity of creating “Paper Roses”, which asked campers to write notes about what they were grateful for in one another. Campers also created vision boards for their own futures and wrote messages on a large thank-you poster for staff and sponsors of the camp. 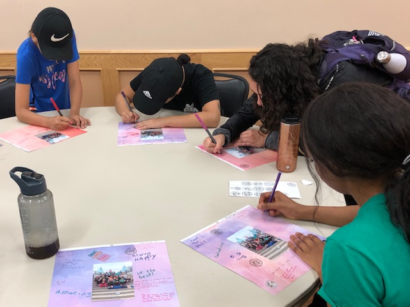 Near the end of the ceremony, campers watched a compilation video of the week, which included photos and video taken by camp staff and many wonderful images taken by the campers themselves! After the video, the closing ceremony finished with group drumming led by the Khast’an Drummers, who did a great job of bringing the campers and staff into the performance and celebration! 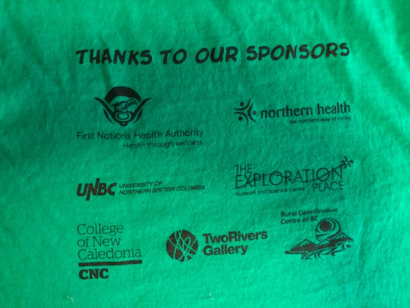 The Health Arts Research Centre would like to express our deepest gratitude to our sponsors: The First Nations Health Authority (FNHA), Northern Health, the University of Northern British Columbia (UNBC), The Exploration Place, The College of New Caledonia (CNC), Two Rivers Gallery, and the Rural Coordination Centre of BC.

We would also like to thank members of the NALS laboratory at UNBC, the group leaders at the UHNBC Simulation Lab, the FNHA Environmental Health Team, Kyle Sam, Darlene McIntosh, and the Khast’an Drummers, as well as our wonderful activity facilitators: Tamera Ketlo, Stephanie Erickson, Vince Prince, Warren Hooley, Marion Erickson, and Lorisha Desjarlais.

Special thanks to our camp coordinators, camp leaders, overnight chaperones, the many volunteers that jumped into activities throughout the week and the members of the Health Arts Research Centre (HARC), who supported the planning and facilitation of this first summer camp.

The success of the camp comes through every contribution made by so many people. Plans have already been put into motion for continuation of the camp for 2020! 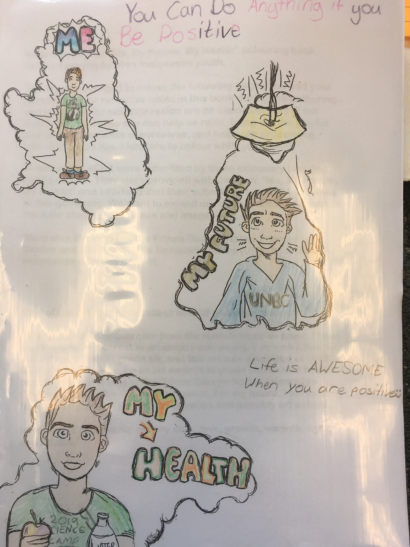